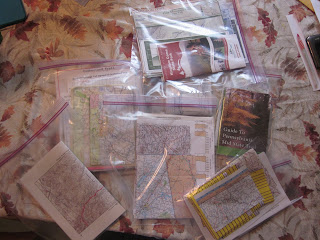 The trail's not all there, but neither am I!

What does it take to hike a trail that isn't completely marked?  This picture is part 1 of the information that I'll be bringing with me.  I have maps on order for the Tuscarora Trail, Crystal Hills Trail (Finger Lakes), and the Headwaters Section (National Geographic maps 791 & 792).  There's a lot more information to print out from the internet, more maps to order and organize, and I have to get a waterproof system and figure out how to get the information to me as I hike, since hiking with all this would add 5 pounds to my pack.

I've really been enjoying the planning process, though I know that as the start date nears, it may get stressful.  I just wanted to take a moment to thank some folks who have helped me out so far, particularly the board members of the Great Eastern Trail Association and my dad.

The Board has been very generous with advice, insider knowledge, and offers of help.  One of the experiences I am looking forward to along the hike is to hopefully get a chance to visit most of them - you all are welcome to join the hike for a day (or days!).

My dad has been my publisher for this journey.  Living on a budget in West Virginia, I don't have a printer and I don't want to use my work printer for the massive number of maps I require.  I've been harassing him for months already with links to documents I need printed, and they always turn out perfectly.  Thank you for all your help!

I just returned from three incredible days at The Gathering here in West Virginia.  I was able to talk to a lot of people about the Great Eastern Trail, and I met a few folks who I hope to visit along the way.  Thanks to all who came and made my first Gathering absolutely magical.  Thank you to everyone who helped make this event a reality!

My favorite moment was singing Walkin' Jim's ALDHA Song, which you can listen to HERE.

I loved seeing "my friends of the trail and my trail of friends."
Posted by Jo at 6:46 PM No comments:

When a squirrel in my chimney woke me up way too early, I knew I wouldn't be able to get back to sleep.

It was springtime in Minnesota, 2011.  I was about a week from leaving for Vermont's Long Trail, and I had no intention of doing much until then.  I was very put-out about being awake so early.  Unable to snooze, I grabbed my laptop and starting bumming around the internet, looking for the next adventure.

I don't know how I ended up on the AmeriCorps website, but I remember typing in "trail" just to see what would come up.  Three jobs came up on my screen.  One was so exciting that I don't remember it, one was with the Tahoe Rim Trail, and one was the Great Eastern Trail.

I had never heard of the Great Eastern Trail, so I Googled the name.  I was surprised that I had never heard of it: after hiking the Appalachian Trail and falling in love with the east, I thought I would have run across any long-distance hiking trails in the area.  I immediately hoped that this was going to be my next adventure.

Happily, I moved to West Virginia that November and began the seemingly impossible task of creating the Great Eastern Trail link between the Pine Mountain Trail and the Appalachian Trail.  Living and working in West Virginia has been incredibly challenging and rewarding.  I have met so many wonderful people and seen so much beauty.  I've also had my heart broken by the roadblocks for this trail - roadblocks that don't need to exist, but sadly do.  The WV portion of trail has a long, long way to go before becoming reality, but I hope it's in slightly better condition after working for a year on it.

Oddly, it didn't occur to me to try to thruhike the trail.  It was not on my radar.  Oh, it was a "someday" dream, but I envisioned it being something I'd tackle in ten or fifteen years.

Last July I thought about what I would do after my year in West Virginia, and I realized how much I wanted to hike the Appalachian Trail again.  I had such an amazing time on the AT that doing it again sounded like a dream come true.  The only problem was my schedule -- I would have to start in January.  As I researched the weather situation in the Smokies that time of year, my enthusiasm waned.  And then it struck me -- the Great Eastern Trail begins farther south, keeps a lower elevation, and has been my project for the last year.  Everything aligned, and I feel incredibly lucky to have this chance.

I wonder if this would have happened if it hadn't been for that squirrel.
Posted by Jo at 2:49 PM 2 comments: