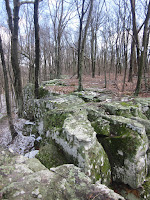 Frozen Head State Park is a highlight of the Cumberland Trail/Great Eastern Trail in Tennessee, and it is home to an infamous marathon.  A film has now been made about Barkley Marathons.  An article about this event and film recently appeared in Outside Online.

You can buy the documentary here or just watch the trailer: barkleymovie.com. 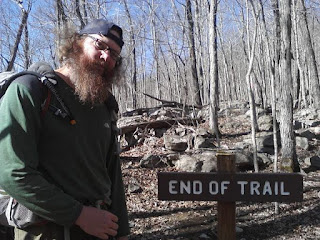 A group of volunteers was building trail in that section that day.  We were able to follow flagging to get between the two sections that were already built.  This end of the trail is no longer the end thanks to volunteers.

Pictures and maps of the now-connected Grassy Cove Segment are available on the Cumberland Trail Conference website.

Good news on the Headwaters Section

I missed this nice story that the Friends of Shenandoah Mountain posted last month.  The Forest Service has rejected the Atlantic Coast Pipeline route that would have impacted Shenandoah Mountain.  Read about it and check out the cool map here.

This is a picture of the area that is being protected.  The Great Eastern Trail's Headwaters Section is hosted in this area on the Shenandoah Mountain Trail. 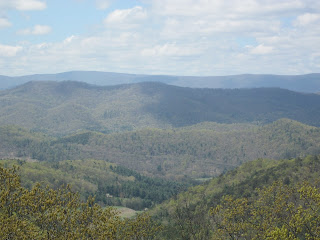 Well done, Forest Service and all who spoke up against this pipeline.

There was rather a lot of Great Eastern Trail roadwalking in Georgia, but there's less now! 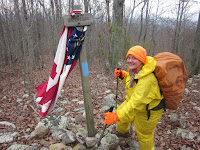 The Georgia section has some really great stuff.  There's a lovely border crossing. This is probably the coolest border crossing on the trail, although Tennessee/Kentucky comes close. Nicely done, Georgia. 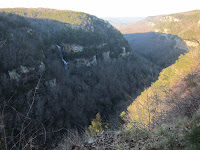 And of course there is Cloudland Canyon, which has got to be one of the top 5 sights along the entire trail. It's amazing.

There's rather a lot of Georgia that looks something like this: 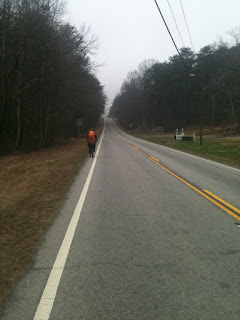 BUT thanks to the incredible volunteer efforts of the Georgia Pinhoti Trail Association, a big chunk of roadwalk has been eliminated in the Cave Spring area.

If you're interested in hiking all or part of the GET, there's a new Facebook group for informal, friendly discussions.  Join us over at Great Eastern Trail Hiking!

Fantastic news from Kentucky!  Senator Jones has withdrawn the bill that would have destroyed the Pine Mountain Trail, which hosts the GET.

Read all about it here.

From the article: With the loss of jobs in eastern Kentucky in recent years, "(w)e have to find ways to create economic activity, help local businesses and one way is to grow adventure tourism,"  he added.

I can't think of a single hiker who wouldn't agree. Now the question is: how do we help communities and congressmen understand that hiking is viable adventure tourism?

Some of the information is somewhat accurate.  It would really be nice if articles about the GET actually featured a picture from the GET, though.  I know, wishful thinking!  Until that happens, I'll just be glad to see the GET getting publicity. It's a wonderful trail and was the best adventure of my life.
Posted by Jo at 12:37 PM 1 comment:

Email ThisBlogThis!Share to TwitterShare to FacebookShare to Pinterest
Labels: paparazzi

Here are steps YOU can take to help save the Pine Mountain Trail: 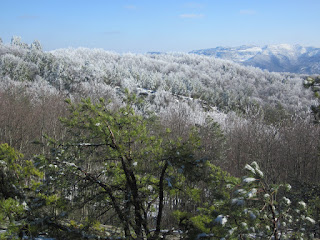 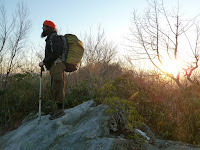 Legislation has been introduced to allow ATVs access to Kentucky's only State Scenic Trail -- The Pine Mountain Trail.

From the link: "SB 102 has catastrophic consequences for the Pine Mountain Trail and its use as a hiking trail. There is zero compatibility between hiking and ATV usage. They cannot coexist. The viability of the Pine Mountain State Scenic Trail as an attraction to bring hikers and tourists into our area has no future if ATV's are allowed continuing use of the Trail. "

The Pine Mountain Trail is glorious - an incredible trail that I recommend to absolutely any backpacker. If this legislation allows ATVs access to this fragile environment, all the work done BY hikers FOR hikers will be destroyed.

Do you care?  Even a little?  PLEASE SIGN THIS PETITION. It will take you 1 minute.

If you care even more, send the senator a kind note. 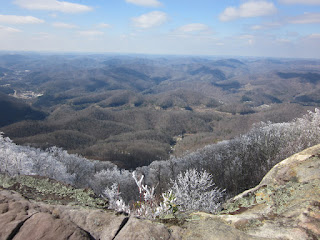 The Best 1-Mile Side Trip on the GET

Last summer on my way home from the Appalachian Trail Biennial, I completed a spur trail of the GET that had haunted me since the 2013 thru-hike. 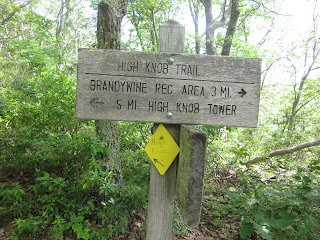 On that late spring day in 2013, we had dry-camped the night before. Water was an issue on the Shenandoah Mountain Trail, but even moreso that day: my water bladder had sprung a leak and I had no water. Zero. Nothing.

When we got to this sign featuring a .5 (yes, it is point-five, the period is hard to see) spur trail to High Knob Tower, Bart and I knew that we just didn't have the water for a 1-mile roundtrip detour.

"It's a thru-hike, not a thorough hike," Bart pointed out, and I knew he was right.  We kept hiking until we found water. Using duct tape and super glue, I fixed the water bladder while Bart sat in the dirt and beheaded woodticks. At that point, it was way too late to turn around to come back and hike the spur trail. We carried on. 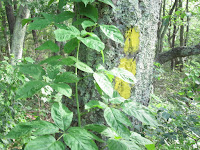 So last summer, I was pumped when my travel buddy/mother agreed to climb to High Knob Tower with me.  The trail is marked with this lovely yellow i, sometimes moderately obscured but not too badly. The trail itself was in great shape. The .5 mile climb was brutal in the heat, but the views from the Tower made it worth it!  Views of Virginia and West Virginia made my heart soar.


On the way back to the car, we got to visit with this little guy.  He wanted the whole trail to himself: 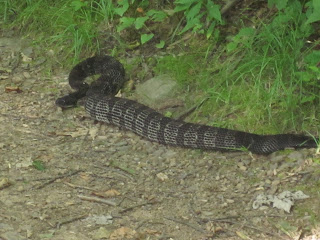 High Knob Tower is an amazing side trip on the Great Eastern Trail.  I very much wish I could have enjoyed it during the thru-hike, but it probably meant more to me to visit it in 2015. 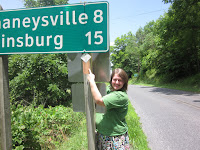 I got to revisit the southern terminus of the Mid State Trail a couple of weeks ago and found myself very homesick for the MST.  I thought I would share my top 10 favorite things about hiking this section of the Great Eastern Trail.

1. Remoteness.  Sure, the trail occasionally goes through towns, but the vast majority of the MST felt wild and untamed. 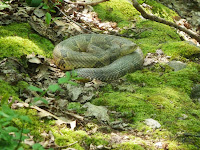 2. Wildlife.  Hillbilly Bart and I had more bear encounters on the Mid State Trail than any other host trail along the Great Eastern Trail.  We saw porcupines, deer, turtles, snakes, frogs, and countless birds.
3. Solitude.  This is a trail that deserves more traffic than it sees, but it was incredible to go days without seeing another person. 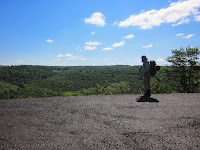 4. Sense of humor.  Those responsible for the guidebook and resupply guide slip in little nuggets of humor that you might miss on first read.  But even on-trail you'll see the MST's sense of humor, with signs that refer to it as the "Metric System Trail" along with signed landmarks such as "Crocodile Spring."
5.  Overlooks.  They're phenomenal.  Enough said. 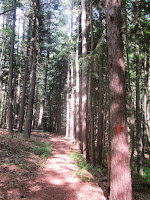 6. Variety.  Lakes, streams, valleys, ridgetops, fields, forests of all varieties . . . the Mid State Trail is one of the most diverse trails I've hiked.
7. Range of difficulty.  Want an easy hike?  The trail around Cowansque Lake or on the Lower Trail section are good bets.  Want a good workout?  Try climbing up to Gillespie Peak.  Whatever your ambition level, the Mid State Trail has a section that's what you're looking for.

8. Water.  Particularly on the northern half of the Mid State Trail, the springs are works of art.  On the southern half, Maple Run Valley has one of the prettiest streams I've ever seen
. 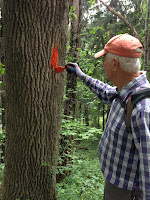 9. Trail towns.  What town could be more welcoming than Everett?  And how many towns provide a shelter in their city park like Woolrich?  The trail towns along the Mid State Trail are some of the best along any trail.

10. People.  The people behind the trail, that is.  The blazes are bright and easy to follow and trail volunteers work tirelessly to make the MST a great hiking experience.  It's a huge job, and they tackle it valiantly.  Thanks to the Mid State Trail Association for all you do!
Posted by Jo at 10:13 AM 5 comments: 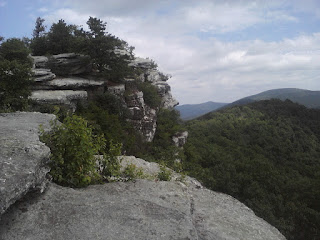 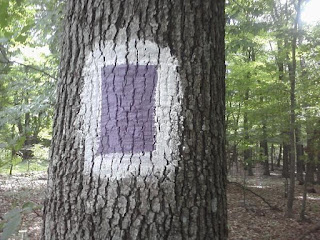 The only purple blazes on the Great Eastern Trail are on the western route of the bifurcation in Green Ridge State Forest.
Posted by Jo at 12:28 PM No comments: 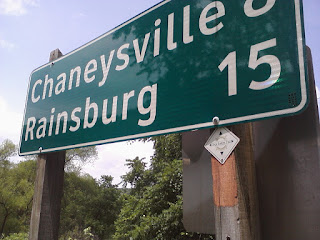 I visited the southern terminus of the Mid State Trail today. Why? Because I was 3 miles from it and it's there.
Posted by Jo at 12:24 PM 2 comments: 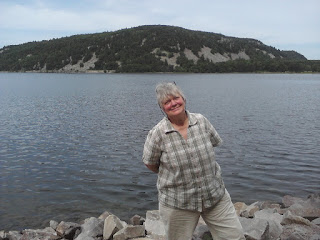 It wouldn't be fair to drive through Wisconsin without visiting the Ice Age Trail at Devils Lake State Park. I convinced my Mom to roadtrip to the Appalachian Trail Biennial in Virginia where I will present about the GET and geek out. We're well on our way! Hope to see some of you there!
Posted by Jo at 8:11 AM 4 comments: